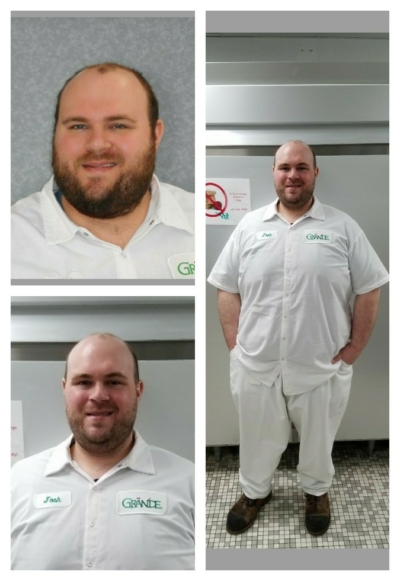 Josh Smith is a Quality Resource Analyst at the Juda Whey facility and was nominated for the Success Story by his co-workers. Over the last year, Josh, has made some great strides in improving his overall health and has lost over 100+ lbs!

Knowing that he would need to really make some lifestyle changes if he truly wanted to lower his blood pressure numbers and increase his quality of life, Josh got serious with his workouts and nutrition. He began participating in boot camp classes offered at Anytime Fitness five days a week, which he still attends to this day! And as part of his membership, Josh has the ability to use the InBody machine which measures his weight but also completes a full analysis of his body including water weight, musculoskeletal measurements, body composition, lean muscle mass, and overall inches. Since starting at Anytime Fitness, Josh has noticed that not only has his blood pressure numbers improved, but also his blood glucose levels improved as well (he was in the pre-diabetic stage before starting his fitness journey). He is down two sizes in shirts and has lost 8 inches in his waist! And overall he just feels better –has way more energy, a lot more confidence, improved endurance and flexibility. Once he was set in his fitness routine, Josh also started to take a closer look at his diet. He worked with a trainer at Anytime Fitness to determine what foods he should be eating and things he should be avoiding. Josh started out small, making little changes here and there and tracking his food and calories on the MyFitness Pal app and found out where he was making some poor food choices. He’s been adding more veggies to his diet and began taking some vitamins and supplements. With those small diet changes he really started to notice the pounds drop.

When asked how he plans to keep up with these lifestyle changes, Josh said that he will continue with his workouts –he has a great support team at Anytime Fitness that helps to keep him stay accountable. His girlfriend is also very supportive and encouraging in his overall goals. Josh has also said making short-term, attainable goals helps keep him motivated. He had set a goal that he wanted to be down 100lbs by his friend’s wedding date, and he is happy to say that he accomplished that goal! He will be attending his friend’s this weekend and will get to say that he has worked hard and lost 100 lbs! But he isn’t stopping there -his next goal is to be less than 300 lbs by September 15, 2018 as that will be the year mark that he started on this journey!

When asked about his obstacles and barriers and how he overcomes them, Josh says that he tries to be forgiving to himself –if he slips up, he knows to just make a better choice the next time. We are all human and slip up from time to time but just need to correct and move forward. He is going to continue to monitor what he is eating and make smarter choices, but not deprive himself either. Josh will continue to weigh himself weekly as a way to stay accountable. He plans to get outside a lot this summer and even purchased a new pair of hiking boots as another way to get some physical activity in! As well, he has set some rules in place for himself. He will not go out to eat or get take-out food unless he is going with friends or his girlfriend. Even so, he said he makes smarter food choices when he does go out. He has also started meal planning and to make things easier has incorporated using his slow cooker for easy, healthy meals (and makes extra for lunches/dinners throughout the week!). He also makes sure to have healthy snacks on hand like almonds, nuts, and peanut butter. His lifestyle changes have even inspired some of his family to work on their behaviors as well! His parents and cousin have started on their own weight loss journeys this year!

Congratulations Josh on your amazing weight loss and improved self! We hope to see you continue with your overall health and wellness efforts and to reach your goals!