Bobbie is the current RN, Case Manager with the Grande Health & Wellness centers. With this position she is a great resource for Associates and spouses as well as the providers within the clinic. She helps with the transitions of care and ensures referrals go smoothly. She is available to assist Associates and families with any health related need or concern, no matter how big or small. Bobbi has been working in a Case Management role since 2009.

Bobbi became involved with the St. Baldrick’s foundation in 2011. At this time her son had a classmate in Kindergarten, Lily, who was battling Neuroblastoma cancer. There were also several other children the same age and younger from their immediate area who were all diagnosed with cancer around that same time. Bobbi felt so helpless at this time. Her family became friends with Lily and her family. Lily’s family had a team started for the Fond du Lac St. Baldrick’s Event that year, Team Lily. Bobbi decided to raise money to shave her head for the cause. Lily was able to join that first event but unfortunately about a year later she passed away from the cancer. Bobbi has remained involved with St. Baldrick’s events in Fond du Lac both as a volunteer and a participant. She has shaved her head ever year except in 2014 because she wanted to grow her hair out and donate it the following year in 2015. Being able to participate in this event each year with the team, Lily’s Legacy, is just a small way to keep Lily’s memory alive. Bobbi is not the only one in her family that is involved with the Foundation. Her son shaved his head in 2014 at the age of 10 and is shaving his head again this year. Her oldest daughter shaved her head at age 17 in 2013 and again last year. Her youngest daughter even shaved her head at age 5 with another classmate of hers in 2013. The before and after photo was from Bobbi’s first event in 2011 and the large group photo is from the first event with Lily present in the wheelchair. Since Lily, Bobbi has been connected to several other people who have had children battling childhood cancer. “It is one of the most heart wrenching things I have seen children and families go through “says Bobbi.

St. Baldrick’s Foundation is a volunteer powered charity committed to funding the most promising research to find cures for childhood cancers and give survivors long, healthy lives to do less toxic treatment. The event this year will be on February 27 at the Fond du Lac Fairgrounds. There are many ways to get involved, you can come to the fairgrounds the day of and volunteer, be a barber and help shave heads, or you can even volunteer to have your head shaved! You can also donate to St. Baldrick’s Foundation. For more information on this event and how to get involved you can go to www.stbaldricks.org. 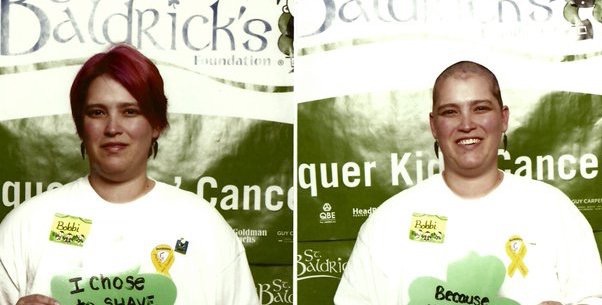 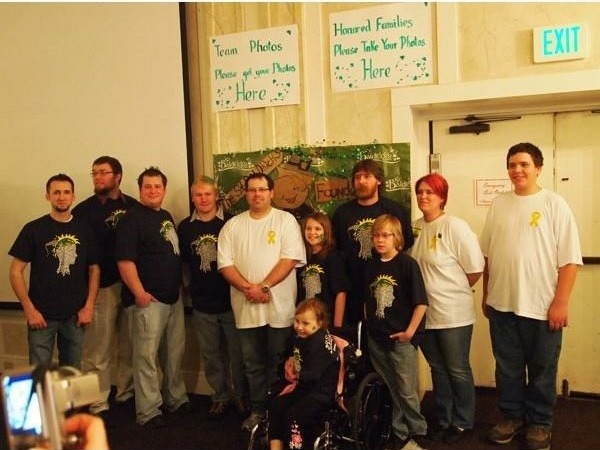