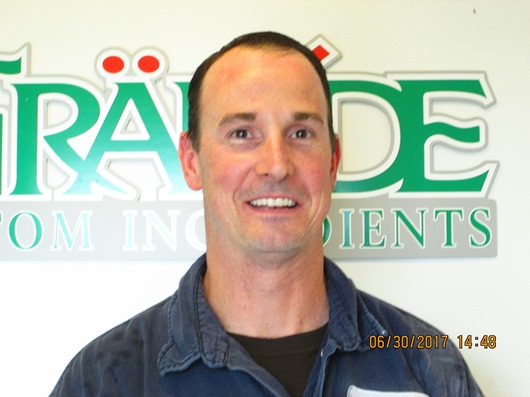 Rob is a Maintenance Associate at the Juda Whey facility who has been with Grande for almost two years. When he participated in the 2016 Health Risk Assessments (HRA) last August he thought he was a fairly healthy person, but his results showed that his Triglycerides on the scorecard were out of range. Once meeting with the Agnesian Health Coach for his first healthcoaching session, he realized he had some changes to make. Even though he passed most areas of the biometric scorecard, his results were not where he anticipated them to be.

Rob took action and started to change his eating habits. He used to eat fast food at least 1-2 times PER DAY and as a result consumed a large quantity of unhealthy fats. Rob now only eats fast food every few weeks, which has made a huge difference in his health.In addition, he is now eating more fruits and vegetables and trying tocook healthier meals using alternatives like olive oil. When he feels hungry he makes sure he has healthy snack options such as vegetables. This spring he even planted a garden so he can have easy access to many healthy options. (If planting a garden won’t work for you, Grande also offers the CSA program where you can purchase a share and receive fresh fruit and vegetable options all summer without the upkeep of your own garden.)

Another change Rob has incorporated into his health routine is drinking morewater and Gatorade that is provided at work. He tries to stay as hydrated as possible to avoid soda. In addition, he has begun working out at least once per day for 45 minutes. This was a difficult change for him at first, as he was only working out once a week. However, after he started to see results and feel better he was able to stay motivated and keep going even when he didn’t feel like it. Now it is just part of his daily routine.

Just in the first month of making these changes Rob lost over 10lbs without really trying to lose the weight! It just seemed to come off because of the initial healthy changes he had made. Rob has continued his healthier lifestyle and since August of 2016 has lost 30 LBS!!!! Recently Rob had his blood work retested, and sawgreat improvement in his numbers and after only 7 months of lifestyle changes. He was able to drop his triglycerides by 221 points and not only fall under the Grande ranges on the scorecard but also improved his numbers to meet the National healthy guidelines. Even though he passed all other areas on the scorecard he still saw great improvement with dropping his total cholesterol by 36 points, LDL (bad) cholesterol by 2 points and was able to raise his HDL (good) by 10 points. He states he is more alert and has way more energy. Making these healthy changes has increased his concentration and improved his sleep as well.

Working with an Agnesian Health Coach has been a great opportunity for Rob. At first he did not know what to expect or if it would even help. “It’s been great to set goals and stay motivated and achieve them little by little.” This is a great example where Rob thought he was healthier than his numbers actually were even though he was hitting most of the areas on the biometric scorecard. As a reminder you should review your biometric results with a clinic nurse practitioner to make sure you are aware of your numbers and where you ideally should be.